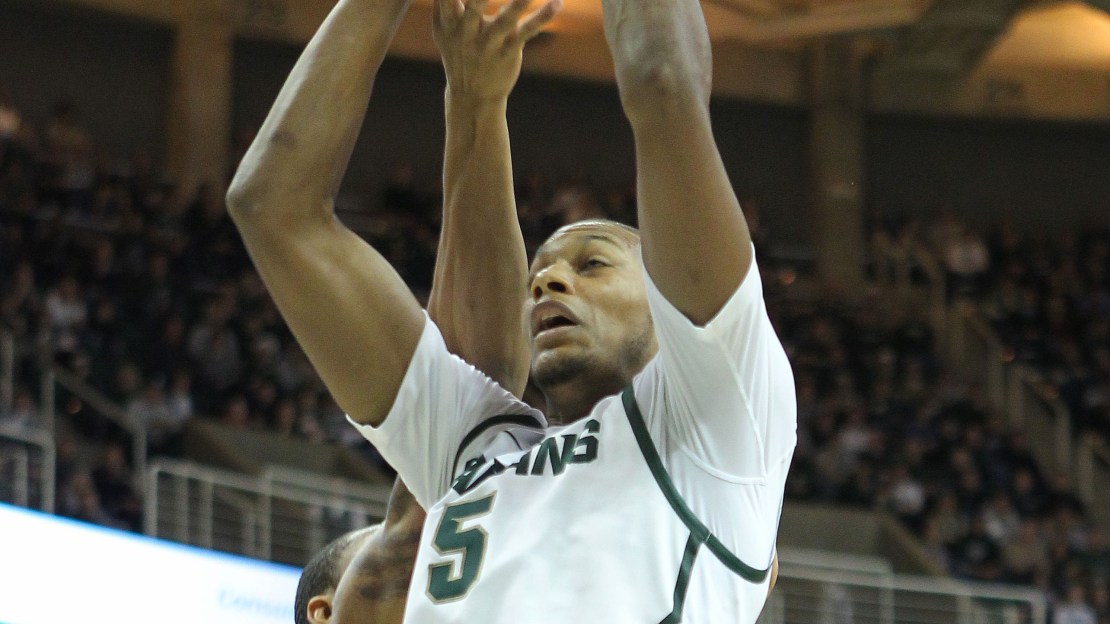 Prior to his breakout performance against Ohio State, Adreian Payne had scored double figures in exactly two Big Ten games as a Spartan. And although his offense was certainly a big reason for Michigan State?s victory, his defense probably deserves more credit. Payne did something that few ever will–make Jared Sullinger look like a bad basketball player. The Ohio State big man was frustrated all game long, and although he had 17 points and 16 rebounds, it came at a cost of 10 turnovers (not to mention 4 fouls).

It goes without saying that 10 turnovers by a post player is an astronomical figure. That?s something one might expect out of a freshman point guard having the worst game of his career. And although Sullinger consumes a lot of possessions for his team, he?s not trying to create for teammates or slash to the hole. His usual progression is:

Indeed, Sullinger had just 20 turnovers total in Big Ten play coming into the game. I don?t think it?s an exaggeration to say that this was the worst game of the big man?s career. So kudos to Payne, for getting the best of Sullinger on both ends of the court. And give credit to Tom Izzo–last year in the only matchup between the two teams, the Spartans held Sullinger to 11 points as he battled foul trouble.

The double-digit road win not only gave Michigan State the inside track for the conference crown, but also served notice that this is a team that figures to do some real damage in March. The Spartans? efficiency margin now sits at +0.18, which is the highest they?ve been at since 2004-05. And because the Big Ten is stronger this year than it was in that season, it stands to reason that this is the best team Tom Izzo?s had since 2001, which was back in the Flintstone Era. While Ohio State still has the best tempo free profile in the Big Ten, MSU also belongs on the shortlist of likely Final Four participants. And really, when Tom Izzo has a really good team, it?s not often that it trips up prior to the final weekend.

In other Big Ten news, Illinois is now firmly on the bubble with its third straight loss, the most recent one being at the hands of Michigan. With three home games and a road matchup at Nebraska, the Illini still have a reasonable shot at .500, which almost surely puts them in the field. But there?s not a lot of room for mistakes, and if there?s one thing Bruce Weber?s team has shown this year, it?s inconsistency. This is the only Big Ten team that?s beaten both Ohio State and Michigan State, but it?s nonetheless been outscored in league play. The cause of Illinois? recent skid isn?t exactly hard to find:

The Illini have completely fallen apart on defense, which is maddening in light of the offensive resurgence the team has shown over the same period. When you give up 1.23 points per possession it?s no one thing, but the fact that opponents have shot over 45 percent from behind the arc certainly isn?t helping. Opponent three point accuracy is something that?s not really controlled by the defense, so Ilinois could really use a karmic reversal over this last stretch of games.

Michigan meanwhile keeps pace with the leaders of the Big Ten, but the team will have to win some road games to actually bring home the title. That said, the Wolverines are showing that they?re better than the crowded middle of the conference. At this point, the team is playing for seeding.

Northwestern and Purdue also squared off in a game that will have big implications on Selection Sunday. Thanks to Robbie Hummel?s 27 points (who is playing his way onto the First Team), Purdue moves to .500 in Big Ten play. Northwestern meanwhile finds itself at 5-7 and probably needing a road win or two to make the Tournament. The Wildcats do have road games remaining against Iowa and Penn State as well, so the window is still open. But there?s not a lot of room for error. The good news is that Northwestern?s offense has come to life over the last 4 games, scoring an average of 1.28 points per possession. If they can keep that up, I like their chances.

Although Purdue got the win, the Boilers still have some work to do to secure a bid. If they sweep the remaining home games, they?ll finish with at least 9 wins and should be comfortably in. But one of those home games is against Michigan State, so it wouldn?t be a bad idea to steal one on the road. That won?t be easy, as Purdue?s road foes (Indiana, Illinois, and Michigan) don?t drop a lot of home games.

There?s only about 3 weeks remaining in the regular season, and with so many teams? postseason fates still in the air, make sure you have plenty of antacids nearby.