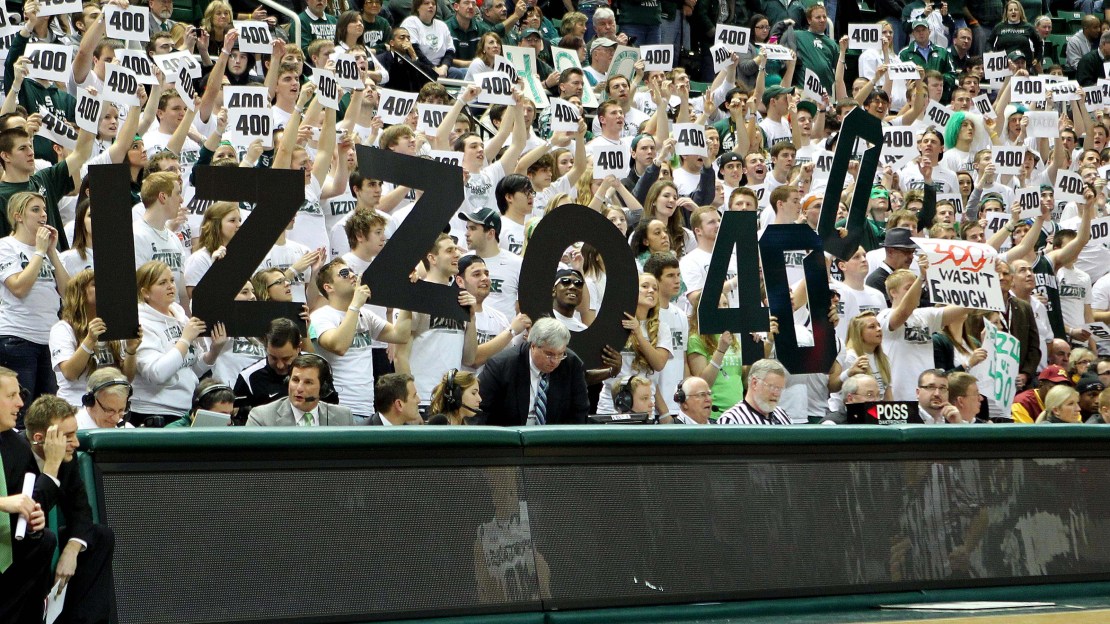 No. 11 Michigan State topped Minnesota to hand Tom Izzo his 400th win (recap) and No. 3 Ohio State blasted Penn State (recap) in our Super Wednesday doubleheader, presented by Buffalo Wild Wings. Catch up on all the action on our Big Ten scoreboard and get stats, video and recaps in this post. Also, Gus Johnson was on the call for the Minnesota-Michigan State game, and here are his top calls. And don't forget to enter the Buffalo Wild Wings Big Ten Men's Basketball Tournament Promotion for a chance to win a prize pack that includes tourney passes.

FINAL: Jared Sullinger scored 20 points and grabbed 13 rebounds to lift No. 3 Ohio State to a 78-54 win over Penn State on Wednesday at Value City Arena. Sullinger and William Buford both had good games for Ohio State (18-3). Sullinger shot 7-of-11 from the field. Buford had 15 points and pulled down nine rebounds. The Buckeyes broke out to an early 18-point lead after a 24-6 run with 6:07 to go in the first half. Sullinger knocked down a free throw that capped off the run by the Buckeyes and helped Ohio State lead 38-18 at the half. Ohio State hit 50 percent of its field goals (25-of-50). The Buckeyes shot 24-of-34 from the free throw line. Ohio State also got a double-digit game from Aaron Craft, who scored 11. Penn State (10-12) struggled from the floor, shooting 31 percent (20-of-64). Tim Frazier led the way for the Nittany Lions, with 16 points, while Jermaine Marshall (14) and Cammeron Woodyard (10) also finished in double figures. Winning the battle on the boards was crucial for the Buckeyes, as they grabbed 42 rebounds to 30 for Penn State. Ohio State never trailed in the game. The Buckeyes' largest lead was 29, which came midway through the second half.

FINAL: Draymond Green scored 22, grabbed 14 rebounds and handed out six assists to help No. 11 Michigan State past Minnesota 68-52 on Wednesday at the Jack Breslin Student Events Center. With the victory, Tom Izzo locked up his 400th career win. Michigan State (17-4) shot 54 percent from the field (26-of-48). The Spartans went 14-of-23 from the charity stripe as a team (61 percent). Michigan State also got a solid contribution from Branden Dawson, who scored 16. Rodney Williams scored 15 points, hauled in four rebounds, made 6-of-10 shots from the floor, and drilled 3-of-5 three-pointers for Minnesota (15-6) in the loss. The Golden Gophers had trouble finding their touch, shooting just 38 percent (18-of-47) from the field. Minnesota was on fire from beyond the arc during the game, shooting 38 percent (6-of-16). More Minnesota scoring came from Ralph Sampson III, who scored 10. The Spartans won the rebounding battle en route to victory, pulling down 32 boards to 24 for the Golden Gophers.