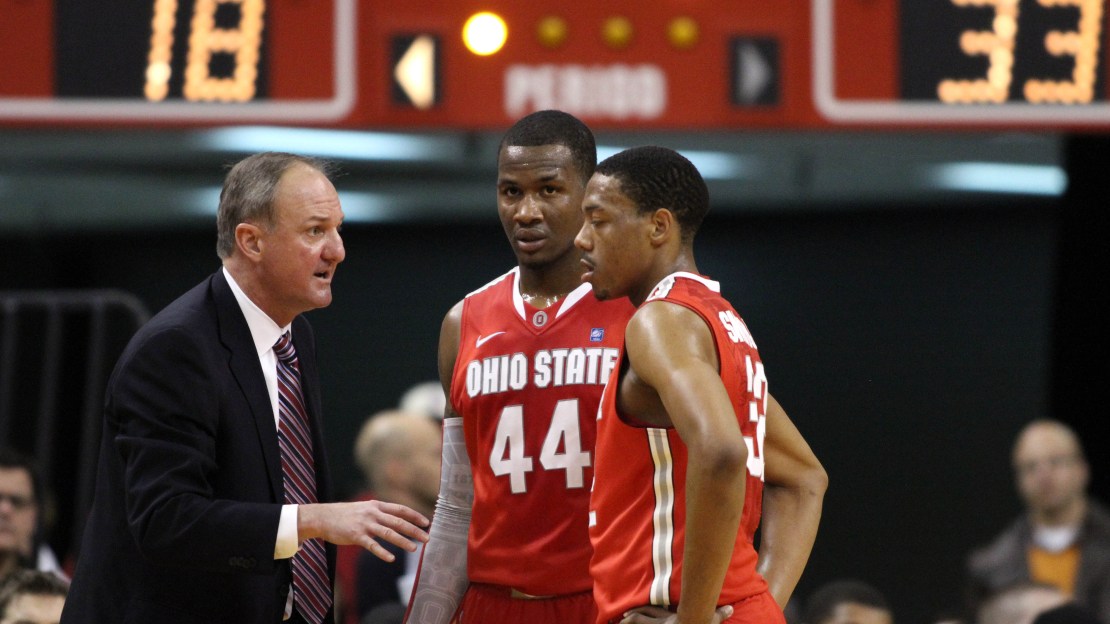 Can you see it? I can. It?s stratification in this crazy Big Ten title chase. Ohio State, Michigan State and Michigan sit atop the standings with 5-2 league marks. Right behind that trio are Wisconsin, Illinois and Purdue with three conference defeats.

But discounting the standings, I think the Buckeyes, Spartans and Badgers are about to pull from the pack and emerge as the three top teams in the league.

The next tier of teams is Michigan, Indiana, Illinois and Purdue.

But, as we all know, things can change quickly in this wacky conference race. Here?s a look at the week ahead in the Big Ten, the nation?s top league-and most fun title chase to watch.

Game of the week: Michigan at Ohio State, Sunday. With no NFL football, this will be the marquee sporting event on the TV dial Sunday. Thad Matta has owned the Wolverines, possessing a 13-2 record vs. Michigan and 7-0 in Columbus. I don?t think Michigan is ready for this.

Don?t overlook this game: Indiana at Wisconsin, Thursday. As coaches always say-it?s not who you play, it?s when you play them. And that may be bad needs for the Hoosiers. Yes, Indiana broke a three-game losing skid vs. Penn State on Sunday, but they still are a work-in-progress that depends too much on the 3-point shot and plays soft defense on the perimeter. Meanwhile, the Badgers have won four in a row after a three-game losing streak and are the hottest team in the Big Ten with Hoosiers coming to Madison on Thursday.

Individual matchup to watch: Check out Michigan?s Tim Hardaway Jr. vs. Ohio State?s William Buford on Sunday in Columbus. These may be the two top wing players in the Big Ten. Each has a similar game and is lithe athletes who run the floor, can dribble-drive and shoot. While Hardaway isn?t surrounded by as much talent and will need to have a huge game for the Wolverines to have a chance to escape with a victory, Buford will be looking to emerge from a funk.

Must win: If Purdue wants to remain a viable player in this wild and wooly Big Ten race, it needs to defend its turf when Michigan comes calling on Tuesday. The Boilermakers will be fueled by an always-raucous Mackey Arena crowd, but will that compensate for a talent deficiency it will encounter vs. the Wolverines? If Purdue doesn?t shoot well, play tough defense and have point man Lewis Jackson healthy, it will get beat by a surging Michigan squad.

Big week: Indiana. This could be a week that the Hoosiers look back on and say it sparked them to big things ? or sent them on a tailspin they never recovered from. It begins with a game on Thursday at Wisconsin in the Kohl Center, where the Hoosiers won on their first visit in 1998 ? and haven?t since. The week ends with a visit from pesky Iowa on Sunday. What?s it gonna be, Hoosiers?

Injury update: Robbie Hummel?s knee is still cranky to the point where he is limited in practices and often times sits out so he?s as fresh as possible for games. As a result, his shooting is suffering. In an 83-58 loss at Michigan State on Saturday, Hummel went 0-for-11 from the field (0-for-6 from 3-point range) and finished with two points on two free throws in 22 minutes. The last three games, the senior has hit 10-of-42 shots (23.8 percent). For the season, Hummel is shooting 39.1 percent and averaging 15.4 points.

Stat watch: 49.0, Wisconsin?s points allowed per game, which paces the nation. The Badgers also lead the country in field-goal percentage defense (35.4). This, ladies and gentlemen, is vintage Bo Ryan basketball and a major reason why Wisconsin is surging and always in the hunt.