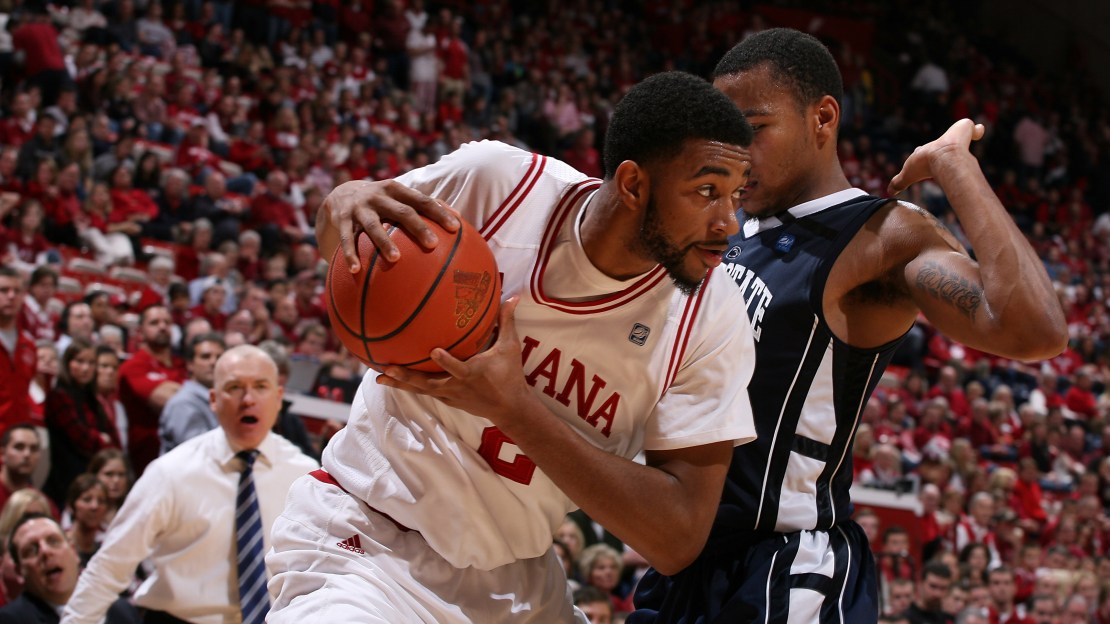 No. 13 Indiana took down Penn State (recap), Wisconsin held off No. 25 Illinois (recap | Dienhart column) and Minnesota dropped Northwestern (recap) in a BTN tripleheader Sunday. Catch up on all the action on our Big Ten scoreboard and get stats, video and recaps in this post. Also, did you see Rodney Williams' acrobatic And-one play and his impressive slam dunk? Watch them here.

FINAL: Cody Zeller scored 18 points and grabbed four rebounds to lead No. 13 Indiana to a 73-54 win over Penn State on Sunday at Assembly Hall in Bloomington. Indiana (16-4) shot 53 percent from the field (24-of-45). The Hoosiers were on fire from beyond the arc during the game, shooting 44 percent (7-of-16). Indiana shot 18-of-23 from the free throw line. The Hoosiers also got solid contributions from Christian Watford, who scored 11 and Jordan Hulls, who scored 14. Tim Frazier scored 21 points and hauled in three rebounds for Penn State (10-11) in the game. The Nittany Lions shot just 34 percent from the field (17-of-50). Penn State also got a double-digit game from Nick Colella, who scored 11. Winning the rebounding battle was a key to victory for Indiana as it outrebounded the Nittany Lions 30-23.

HALFTIME: Cody Zeller is having a big game, but No. 13 Indiana still trails Penn State 29-27 at the break. In the first 20 minutes, Zeller scored 12 points, grabbed three rebounds, and shot 4-of-5 from the field. Seven Indiana players have scored. Tim Frazier led the way for the Nittany Lions in the first half, with 10 points and three rebounds.

FINAL: Wisconsin trailed in the waning moments of Sunday's game, but took the lead for good on a field goal by Ben Brust with with 4:51 remaining and hung on for a 67-63 upset triumph over No. 25 Illinois at Assembly Hall. Neither team could seize control of the game, as there were 11 lead changes. Meyers Leonard had a good game for Illinois (15-5) in defeat, with 16 points and 11 rebounds. Jordan Taylor sparked Wisconsin (16-5), as he had 19 points, hauled in nine rebounds, and contributed five assists in the win. The Badgers shot 9-of-22 from three-point range during the game, good for 41 percent. Wisconsin also got a double-digit contribution from Jared Berggren, who scored 18. Tracy Abrams shot 4-of-6 from the field and scored nine points for the Fighting Illini. Illinois also got double-digit efforts from Joseph Bertrand (15 points), D.J. Richardson (13) and Brandon Paul (10).

HALFTIME: Neither No. 25 Illinois or Wisconsin managed to take complete advantage in the first half of a back-and-forth game that goes into the break tied at 26-26. The lead was exchanged seven times in the first 20 minutes. The Badgers led 21-15 when the Fighting Illini went on a 7-0 run to take a 22-21 lead. Wisconsin has been able to keep Illinois' leading scorer, Brandon Paul, under control thus far. With two points, the junior will need a strong second half to get to his usual level of production (14.2 points per game). The Badgers fired often and fired with accuracy from distance, hitting 50 percent (4-of-8) of their three-point attempts. Wisconsin shared the ball, finishing with six assists on 10 field goals in the first half. The Fighting Illini's Joseph Bertrand had a big first half, with 12 points and five rebounds. Jared Berggren is putting together a nice game so far for the Badgers. The junior has 10 points.

FINAL: Julian Welch scored 14 points and grabbed six rebounds and Joe Coleman added 16 points and five boards as they teamed up to lead Minnesota to a 75-52 victory over Northwestern on Sunday at Williams Arena. Minnesota (15-5) started the game out strong with a 21-4 run, which allowed it to take a 17-point lead in the first. Chip Armelin finished off the run with a field goal and propelled the Golden Gophers to a 41-24 lead at intermission. The Golden Gophers hit 58 percent of their field goals (30-of-52). Minnesota also got double-digit performances from Ralph Sampson III, who scored 10 and Rodney Williams and Austin Hollins, who each scored 11. Alex Marcotullio scored 11 points, corralled four rebounds, and contributed four assists for Northwestern (12-7) in the game. The Wildcats shot just 33 percent from the field (18-of-55). Northwestern also got a double-digit contribution from John Shurna, who scored 21. Winning the battle on the boards was crucial for the Golden Gophers as they grabbed 34 rebounds to 24 for the Wildcats. Minnesota never trailed in the game.

HALFTIME: Northwestern has struggled to give Minnesota a test, as the Golden Gophers lead 41-24 at the half. Minnesota led from the start and led by as many as 22 points. The game was tied before the Wildcats went into a funk, going the next 4:55 without scoring, and allowing the Golden Gophers to take a 11-0 lead early in the game. Northwestern put the clamps on Minnesota's three-point game (2-of-7, 29 percent from long range), although the Golden Gophers shot 64 percent in the first half on two-point field goals. The Wildcats moved the ball in the first half, accounting for six assists on nine field goals. Minnesota's Ralph Sampson III already has eight points and four rebounds. Alex Marcotullio is putting together a nice game so far for Northwestern. The junior has six points and three rebounds.