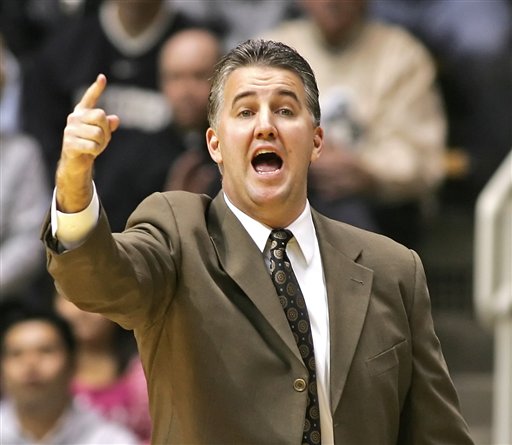 The Gene Keady coaching tree is scratching its head after last weekend. Both Purdue and Illinois lost, and lost in ways that have been all-too-familiar to fans of those teams. The Boilermakers started out well enough, nearly running Butler out of the gym in the first half: But it was a different story in the second frame:

What changed? Well, Butler coach Brad Stevens instructed his team to focus in on Robbie Hummel and Ryne Smith, and basically give everyone else on the team room to shoot perimeter jumpshots. Why would the coach issue such an order?

The truth is that Purdue?s only real threats from outside are Hummel and Smith. Granted, those guys can really shoot, but nonetheless Stevens has shown the rest of the Big Ten how to take down the Boilers. Close out hard on Hummel and Smith, and pack it in against everyone else. Purdue?s defense will always keep it in games, but if Matt Painter does not adjust for this strategy, Purdue might be in for a rougher season than most predicted.

As for the other branch of Keady coaching tree, Bruce Weber?s Illini got crushed by UNLV on Saturday. The eternal optimist notes that Illinois held the Rebels to their second-lowest points-per-game output on the season, and that the Illini are unlikely to shoot so poorly again. Indeed, Illinois actually outplayed UNLV in every statistical category, save one.

But noting the bright side of things in a 16-point loss on a semi-home court is going to get some eye-rolling responses. I?ll go on record here and suggest that yes, Illinois fans ought to be concerned about the offense. Sure, two-point shooting has been a relative strength of this team so far, so the precise way in which they lost to the Rebels might be an anomaly. But if Big Ten coaches are going to focus on Hummel and Smith, then surely they?ll piece together that D.J. Richardson is the only Illini making over a third of his three-point attempts. As long as the rest of the team can?t shoot, expect defenses to dare it to prove otherwise.

There are bigger concerns here as well. Collectively, Purdue and Illinois have wins over Iona, Temple, and Gonzaga. Each of those teams is currently projected to finish in the 40-50 range in RPI. If any of them should stumble, they?ll delete a top-50 win for the Boilers and/or the Illini. Illinois will try to spring the upset this Thursday against heavy favorite Missouri, but if they fail to do so, both teams will enter the conference season with possibly zero quality wins. March is still a ways off, but this could be the kind of non-conference resume that a 9-9 conference record cannot save. The good news/bad news situation is that both teams will have plenty of chances against top competition by playing in the nation?s strongest conference.

While the students have been sent home for the holidays, there are still some good matchups this week. As mentioned above, Illinois faces top-10 Missouri on Thursday in the annual Braggin? Rights game. Also on Thursday, Northwestern will have a chance to pick up a big win at Creighton. And next week, the real season begins with conference action.