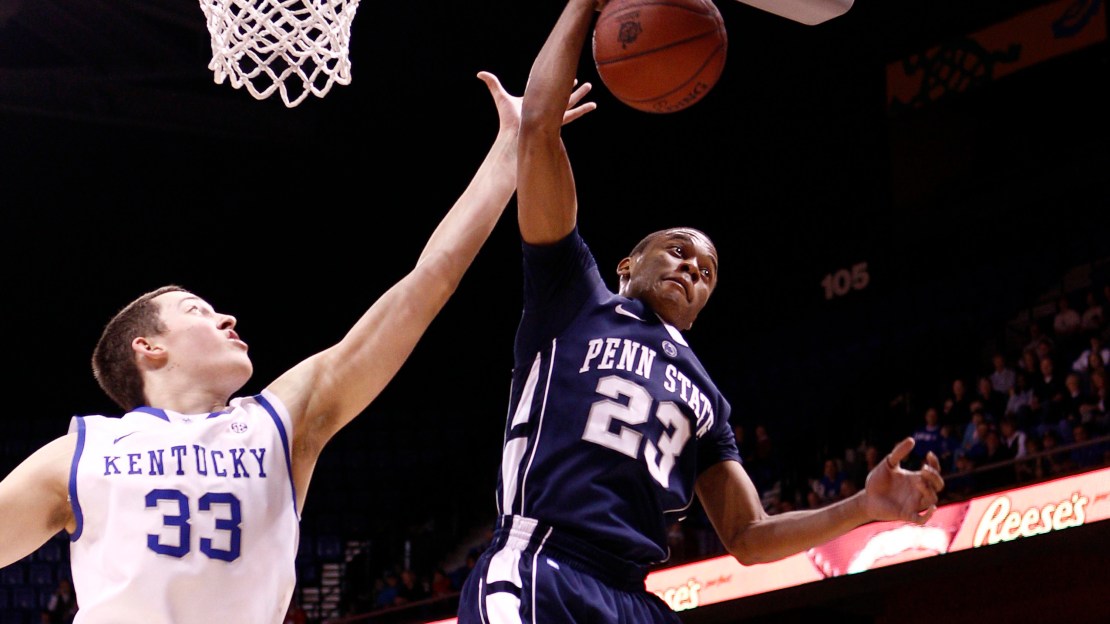 Indiana and Wisconsin cruised to easy victories Saturday night in Big Ten men's hoops action, while Penn State fell to No. 2 Kentucky. You can catch up on all the action and see all the stats on our BTN men?s basketball scoreboard. Also, dive into this post for halftime updates and final recaps for the three games. Three Big Ten women?s teams were in action Saturday, as well, and you can see those scores and stats on our BTN women?s scoreboard. Saturday was Superhero Night at Assembly Hall. Watch a montage of some of the costumes.

FINAL: Cody Zeller scored 23 points and Christian Watford added 19 points as they teamed up to lead Indiana to a 94-65 victory over Savannah State on Saturday at Assembly Hall in Bloomington. The Hoosiers shot 57 percent from the field (28-of-49). Indiana went 35-of-47 from the charity stripe as a team (74 percent). Zeller gave the Hoosiers a boost, thanks to 6-of-7 shooting from the field. In addition to Zeller's performance and Watford's stellar play, Will Sheehey chipped in 15 points and Verdell Jones III scored 11 points. Joshua Montgomery tallied 12 points for the Tigers in a losing effort. Savannah State went 17-of-24 from the charity stripe as a team (71 percent). In addition to Montgomery's production, Preston Blackmon scored 11 points and Rashad Hassan scored 10 points. Indiana never trailed. The Hoosiers' largest lead was 35, which came with 3:21 remaining..

HALFTIME: A strong offense has carried Indiana to a 46-31 lead over Savannah State after 20 minutes. The leading scorers on both sides have been held in check so far. The Hoosiers' Victor Oladipo and the Tigers' Rashad Hassan have both been held in check during the first half. Oladipo has two points and Hassan has scored four. Indiana built its lead by drawing fouls with an aggressive offense. The Hoosiers took 19 free throws. Indiana led from the start and led by as many as 15 points. The Hoosiers fired often and fired with accuracy from distance, hitting 50 percent (2-of-4) of their three-point attempts. Indiana's Cody Zeller already has nine points. Savannah State's Preston Blackmon had a big first half, with seven points..

FINAL: Josh Gasser paced Wisconsin with 16 points to lead the Badgers to a 69-33 victory over Wofford on Saturday at Kohl Center in Madison. After going into the break with momentum, the Badgers kept their foot on the gas to start the second half. Wisconsin was winning 13-10 in the first half before it went on a 29-5 run to extend its lead to 27 points early in the second half. The Badgers hit 50 percent of their field goals (28-of-56). Wisconsin shot 9-of-23 from three-point range during the game, good for 39 percent. To go along with Gasser's efforts, Ryan Evans scored 13 points and Jared Berggren registered 13 points. Kevin Giltner contributed 10 points for the Terriers in the loss. Wofford shot just 27 percent from the field (13-of-49). Besides Giltner's work, Karl Cochran tallied 10 points. Winning the battle on the boards was crucial for the Badgers as they grabbed 39 rebounds to 21 for the Terriers. Wisconsin never trailed..

HALFTIME: Jared Berggren and Josh Gasser have teamed up to give Wisconsin 32-12 lead over Wofford. Berggren scored nine points, grabbed eight rebounds, and shot 4-of-7 from the field. Gasser scored eight points and shot 2-of-3 from the field. The Badgers never trailed in the first half and led by as many as 22 points. Wisconsin was leading 13-10 when it used a 19-0 spurt to widen its advantage to 32-10. Ben Brust, the leading scorer this season for the Badgers, has not made much of an impact through the first 20 minutes. He enters halftime with two points. Racking up eight assists on 13 baskets, Wisconsin demonstrated its offensive efficiency. Most of the Terriers' offense has come from Karl Cochran and Drew Crowell, who have scored 10 of the team's 12 total points. Cochran has scored six and Crowell has added four. Wofford moved the ball in the first half, accounting for four assists on five field goals.

FINAL: Doron Lamb scored 26 points and grabbed five rebounds to lift Kentucky to an 85-47 win over Penn State on Saturday at Mohegan Sun Arena in Uncasville in the Hall of Fame Tip-Off. Lamb and Terrence Jones both had good games for the Wildcats. Lamb knocked down 8-of-13 shot attempts. Jones tallied 15 points, corralled 10 rebounds, had five assists, and went 6-of-8 from the field. Kentucky hit 55 percent of its field goals (28-of-51). The Wildcats shot 10-of-19 from three-point range during the game, good for 53 percent. Kentucky went 19-of-29 from the charity stripe as a team (66 percent). Michael Kidd-Gilchrist shot 4-of-5 from the field and scored nine points for the Wildcats. Along with Lamb's work and Jones' stellar play, Kyle Wiltjer chipped in 19 points. Ross Travis had 10 points and yanked down nine rebounds for the Nittany Lions in a losing effort. Penn State had trouble finding its touch, shooting just 28 percent (18-of-65) from the field. Along with Travis' performance, Tim Frazier scored 11 points. Kentucky never trailed. The Wildcats' largest lead was 41, which came with 7:39 to go. Kentucky led 8-5 early in the game before it widened the margin to 34 points with a 39-8 run that ended late in the first half. Wiltjer finished the run off with a field goal, which helped Kentucky lead 47-15 at halftime.

HALFTIME: Doron Lamb scored 17 points for Kentucky as the Wildcats lead Penn State 47-15 at the half. Lamb and Terrence Jones are leading the way for the Wildcats. Lamb shot 6-of-8 from the field. Jones scored six points and shot 2-of-2 from the field. Kentucky was able to draw fouls and get to the line with regularity. Through 20 minutes of play, the Wildcats have attempted 15 free throws. Kentucky led by as many as 34 points in the first half and never trailed. Leading 40-13, the Wildcats went on a 7-0 run to open up a 47-13 advantage. Kentucky has been more effective from beyond the arc than the inside and might want to attempt more three-point shots in the second half after shooting 67 percent (6-of-9) from three-point range in the first half. Anthony Davis, the leading scorer this season for the Wildcats, has not made much of an impact through the first 20 minutes. With three points, he will need a strong second half to get to his usual level of production. The Nittany Lions' Jonathan Graham had a good first half, with four points.