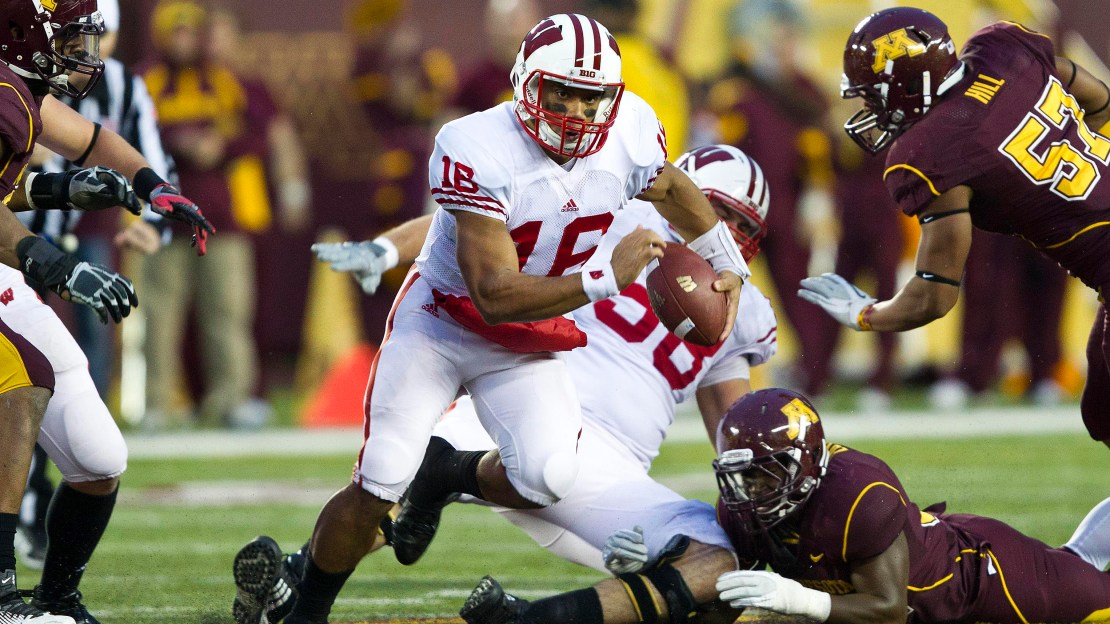 Every week during the football season, Brent Yarina posts his latest Big Ten Power Rankings. Week 11 saw Penn State, the Big Ten's last undefeated team in conference play, suffer its first Big Ten defeat. As for the power rankings, they are not meant to mimic the Big Ten standings. What fun would that be? They aren?t scientific, either. They?re simply Brent?s thoughts on where each Big Ten team stands after its latest game and entering its next contest. Agree? Disagree? Tweet @BTNBrentYarina.

1. Wisconsin (8-2, 4-2) - Star center Peter Konz's foot injury could loom large, but it's going to take a lot to derail this Wisconsin offense. Russell Wilson just put up one of the most efficient games you'll ever see (16 of 17 for 178 yards and 4 TDs), Montee Ball broke the Big Ten single-season record for touchdowns with three more scores, and struggling receiver Nick Toon broke out of his prolonged funk (8 rec., 100 yards, 2 TDs). Look out, Big Ten.
Last week: No. 1
Next game: at Illinois

2. Michigan State (8-2, 5-1) - The Spartans are a good team, but when they run the ball effectively, they are a very good team. Le'Veon Bell has sparked Michigan State's previously struggling running attack the last two weeks, with 208 yards and three touchdowns, which has opened things up for Kirk Cousins and the rest of the offense. It's no surprise Cousins has compiled two of his best games the last two weeks, and it's the direct result of finally having a running game to support him.
Last week: No. 4
Next game: vs. Indiana

3. Nebraska (8-2, 4-2) - The Huskers went into a revved up and emotional Beaver Stadium and handed Penn State its first Big Ten loss Saturday. It was a fantastic win, regardless of the circumstances, and it kept the Huskers in the race for the Legends Division, assuming it can win out and Michigan State loses once. Oh, and for all the talk about Rex Burkhead being overworked, he went for 121 yards and found the end zone for the 10th straight week.
Last week: No. 3
Next game: at Michigan

T-4. Michigan (8-2, 4-2) - Illinois' offense is a mess right now, but don't let that take away from Michigan's dominant defensive effort Saturday. The Wolverines shut out the Illini and limited them to a ridiculous 30 yards, including minus-12 rushing yards, in the first half. For the game, Michigan surrendered just 37 rushing yards on 33 carries (1.1 yards per carry) – a very good sign with Nebraska's talented rushing attack looming Saturday.
Last week: No. 5
Next game: vs. Nebraska

T-4. Penn State (8-2, 5-1) - All the Penn State critics pointed to the team's challenging final three games when it opened 8-1, including 5-0 in the Big Ten. Well, the Nittany Lions opened their backloaded schedule with a home loss against Nebraska on Saturday, and now they must recover – both from the loss and the realization that Joe Paterno is gone – before they close the season on the road at Ohio State and Wisconsin.
Last week: No. 2
Next game: at Ohio State

6. Northwestern (5-5, 2-4) - Remember when the Wildcats were struggling during their five-game funk? They've since won three in a row, and while two of the wins came against Indiana and Rice – teams with a combined 4-16 record – there aren't many offenses outplaying them. As long as Dan Persa can stay healthy, and on the field, Northwestern's offense can go head to head against any foe.
Last week: No. 8
Next game: vs. Minnesota

7. Iowa (6-4, 3-3) - It's been an up-and-down last three weeks for the Hawkeyes, what with the unexpected loss to Minnesota, the victory over ranked Michigan, and then the deflating home loss to Michigan State. So where does this team stand? Nobody knows. It has some of the Big Ten's best offensive talent, in James Vandenberg, Marcus Coker and Marvin McNutt, but it can't seem to put it all together at the right time.
Last week: T-No. 6
Next game: vs. Purdue

8. Ohio State (6-4, 3-3) - It's time for the Buckeyes to open up the old playbook, because it's too hard for a team to have consistent success when it's one dimensional and completing a handful of passes every week. In his six starts, Braxton Miller has completed a total of 31 passes – an average of 5.2 completions per game.
Last week: T-No. 6
Next game: vs. Penn State

9. Purdue (5-5, 3-3) - Just about every team plays better at home, but the Boilermakers take it to another level. Purdue is 5-1 at Ross-Ade Stadium following its overtime win over Ohio State, meaning it's just 0-4 away from West Lafayette. One win away from becoming bowl eligible for the first time since 2007, Purdue will need to beat Iowa at home Saturday or test its luck on the road in the finale, albeit at struggling Indiana.
Last week: No. 10
Next game: vs. Iowa

10. Illinois (6-4, 2-4) - Paging the Illinois offense… The Illini haven't won since Oct. 8 at Indiana, and the common theme during the four-game skid has been their inability to run the ball. Illinois has averaged just 116.5 rushing yards and 3.1 yards per carry since its last win (numbers that took a serious hit following Saturday's 37-yard performance, on 33 carries), and that's why it hasn't scored more than 14 points in any of its last four games.
Last week: No. 9
Next game: vs. Wisconsin

11. Minnesota (2-8, 1-5) - Make it eight losses in a row for Minnesota against rival Wisconsin. Following Saturday's blowout defeat at TCF Bank Stadium, the Gophers haven't topped the Badgers since 2003. The positives from Minnesota's latest Axe loss: The Gophers only committed three penalties, had one turnover and allowed just one sack. So it's not like the Gophers beat themselves.
Last week: No. 11
Next game: at Northwestern

12. Indiana (1-9, 0-6) - Right about now, Indiana can only hope it finishes the season strong and builds some momentum for next season. The Hoosiers have lost seven consecutive games, but with the way Tre Roberson is playing, they could be a surprising spoiler down the stretch, a la Minnesota last season.
Last week: No. 12
Next game: at Michigan State

@BTNBrentYarina Completely disagree. It was a fluke, Northwestern beat Nebraska. 24-3 over MSU isn't a fluke at all.

@BTNBrentYarina well, I'm looking forward to MSU-Wisky in Indy so we can settle this number 1 & 2 business.