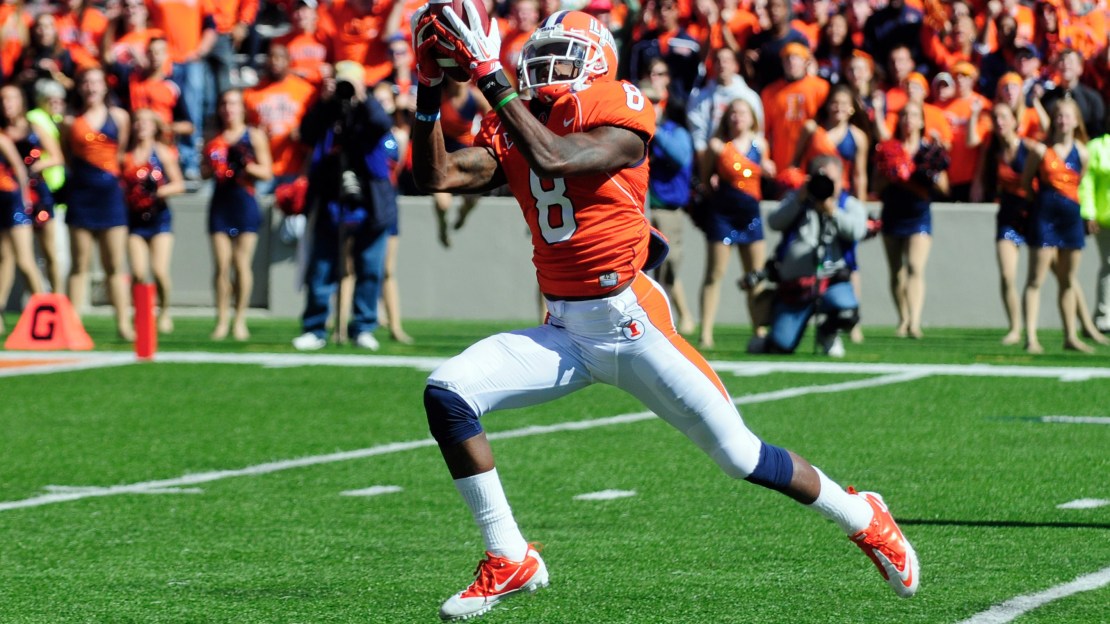 (AP) Nathan Scheelhaase scored a 1-yard touchdown with 13 seconds left Saturday to lead No. 24 Illinois to a 38-35 comeback win over Northwestern. The sophomore QB threw for a career-high 391 yards and three touchdowns for the Illini (5-0, 1-0). All three TD passes went to A.J. Jenkins, who had 12 catches for a school-record 268 yards. Scheelhaase had to engineer two comebacks to pull out the win over the Wildcats (2-2, 0-1). First, Illinois scored 21 unanswered points after Northwestern took a 28-10 third-quarter lead. Then Scheelhaase scored the game-winning touchdown after a late touchdown run by Jacob Schmidt gave the Wildcats a 35-31 with just over a minute to play. Read the full AP recap, check out the box score and see our Big Ten scoreboard.

THIRD QUARTER: Northwestern holds a 28-17 advantage over Illinois at the end of the third quarter in what would be an upset. The Wildcats opened up the lead, 21-10, after marching down the field for a seven-play, 80-yard drive that ended when Dan Persa found Jeremy Ebert open for a 39-yard touchdown pass. Northwestern added to its advantage when Persa and Ebert hooked up for a four-yard touchdown, capping off an eight-play, 39-yard drive to give the Wildcats the lead, 28-10. Northwestern started in good field position at the Illinois 39-yard line when Venric Mark returned a punt. The Fighting Illini made the score 28-17 after Nathan Scheelhaase tossed a 33-yard touchdown to A.J. Jenkins to finish off a 74-yard drive. Illinois' Scheelhaase passed for 62 yards in the quarter to put him over 200 yards for the game. Scheelhaase has 237 yards through the air so far today. The Fighting Illini will start the fourth quarter with the ball.

SECOND QUARTER: Illinois is on upset alert at the end of the second quarter, trailing Northwestern by a score of 14-10. The Wildcats held the Fighting Illini to just 19 rushing yards in the quarter. Northwestern tied the game at seven after Dan Persa and Drake Dunsmore hooked up for a six-yard touchdown to end a 12-play, 69-yard drive. Pass plays were an afterthought for the Wildcats, as Northwestern threw just two passes on that drive. The Wildcats broke the 7-7 tie when Persa tossed a three-yard touchdown to Jeremy Ebert to cap a three-play, 36-yard scoring drive. A fumble recovery by Northwestern set the Wildcats up at the Illinois 36-yard line to start the drive. A 32-yard drive that ended when Derek Dimke kicked a 49-yard field goal helped Illinois narrow the deficit to 14-10. The Fighting Illini's A.J. Jenkins hauled in two catches for 49 yards in the quarter to put him over 100 yards receiving for the game. Jenkins has 108 yards on the day so far. Northwestern will get the ball to start the second half.

FIRST QUARTER: In the first quarter, No. 22 Illinois' A.J. Jenkins stood out. He caught three passes for 59 yards and one touchdown and the Fighting Illini lead 7-0 at the end of the first quarter. Illinois scored when Nathan Scheelhaase found Jenkins open for a 14-yard touchdown pass to cap off a five-play, 32-yard drive, giving the Fighting Illini the game's first lead. Illinois started in good field position at Northwestern's 32-yard line when the Fighting Illini returned a punt. The Wildcats will start the second quarter with the ball on Illinois' 35-yard line.

You u don't believe in yourself nobody else will #illinination

Wow. Forgot how fun it was to watch @persastrong. Great improv on a gutsy fourth-and-4 call. We're inching toward blowout territory.

Dan Persa is now the No. 8 trending topic in the United States. It'd be more fitting if he were No. 7, but whatever. #Northwestern #illini

Jerry Angelo's here and Illinois has given up four sacks. Just a coincidence, right?

My sources were correct! Colter and Persa on the field at the same time!