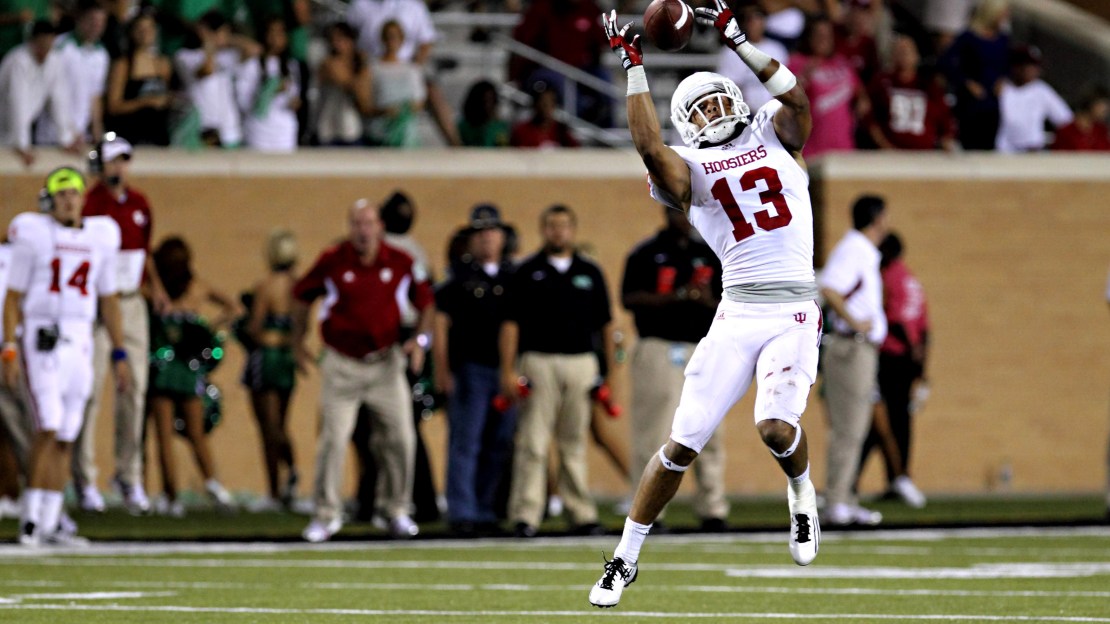 FINAL: Lance Dunbar caught seven passes for 152 yards and one touchdown, helping North Texas to a 24-21 victory over Indiana on Saturday at Apogee Stadium. North Texas (1-3) relied heavily on its rushing to churn out yards and extend its time of possession. The Mean Green ran roughshod over Indiana (1-3), racking up 244 yards on the ground. Dunbar was the lead back for North Texas, as he rushed for 128 yards on 23 attempts. Despite facing a 24-point deficit, the Hoosiers closed to within striking distance of the Mean Green late, but North Texas survived the comeback attempt and secured the win. The Mean Green's Derek Thompson passed for 201 yards, completing 10 of 20 throws. He tossed three touchdowns and one interception. Thompson was also a threat on the ground, as he rushed for 53 yards on seven attempts. Indiana's offense finished the game having gained 402 yards, including 354 passing yards on 30 completions. The Hoosiers' rushing attack contributed just 48 yards to the total, with the tally coming on 26 carries.

FOURTH QUARTER: Lance Dunbar did his best to lead North Texas in the quarter. He ran for 15 yards and the Mean Green stopped a late Indiana rally to win 24-21. The Hoosiers went on a 21-point run to finish the game. Indiana made the score 24-7 when Mark Murphy intercepted of Derek Thompson's pass and returned it for a touchdown. The Hoosiers closed the gap to 24-14 when Dusty Kiel tossed a 44-yard touchdown to Cody Latimer to clinch a 67-yard drive. An 88-yard drive that ended when Kiel threw a 67-yard touchdown pass to Kofi Hughes helped Indiana narrow the deficit to 24-21. Thompson clinched a 200-yard passing game with one in the quarter, part of a 201-yard day for North Texas. The Hoosiers' Edward Wright-Baker hit 200 yards passing for the game in the quarter, part of his 209-yard passing performance.

THIRD QUARTER: Fans were treated to more punts than points in the third quarter, and North Texas now leads 24-0. The teams' stale offenses boomed a total of six punts in the quarter. The Mean Green expanded their lead to 24-0 thanks to a four-play, two-yard drive that ended when Zach Olen kicked a 42-yard field goal. North Texas started in good field position at the Indiana 27-yard line when Royce Hill intercepted Edward Wright-Baker's pass. The Mean Green's Lance Dunbar hit 100 yards rushing for the game in the quarter, part of his 113-yard rushing performance thus far. North Texas' Derek Thompson reached the 200-yard passing mark for the game thanks to 10 in the quarter, and currently sits with 200 yards in all. Indiana has possession on its 19-yard line to start the fourth quarter.

SECOND QUARTER: North Texas scored 21 points in the quarter, and the Mean Green now lead 21-0. North Texas finished with 140 yards through the air and 91 on the ground in the quarter. The Mean Green struck first when Derek Thompson and Lance Dunbar combined for an 83-yard touchdown for a 7-0 lead, the final play of a two-play, 91-yard drive. North Texas opened up the lead, 14-0, after marching down the field for an eight-play, 57-yard drive that ended when Thompson threw a 17-yard touchdown pass to Christopher Bynes. Pass plays were an afterthought for the Mean Green, as North Texas threw just one pass during that series. The Mean Green expanded their lead to 21-0 thanks to a seven-play, 68-yard drive that ended when Thompson found Michael Outlaw open for a 32-yard touchdown pass. Dunbar clinched a 100-yard receiving game with 91 yards in the quarter, part of a five-catch, 141-yard day through two quarters for North Texas. Indiana is set to receive to start the second half.

FIRST QUARTER: The first quarter saw both teams combine for no points and three turnovers and the game is tied 0-0 at the end of the first quarter. Indiana will start the second quarter with possession on its 45-yard line.

Not much to say about that half of football for Indiana. Looks like a big step back and that's saying something