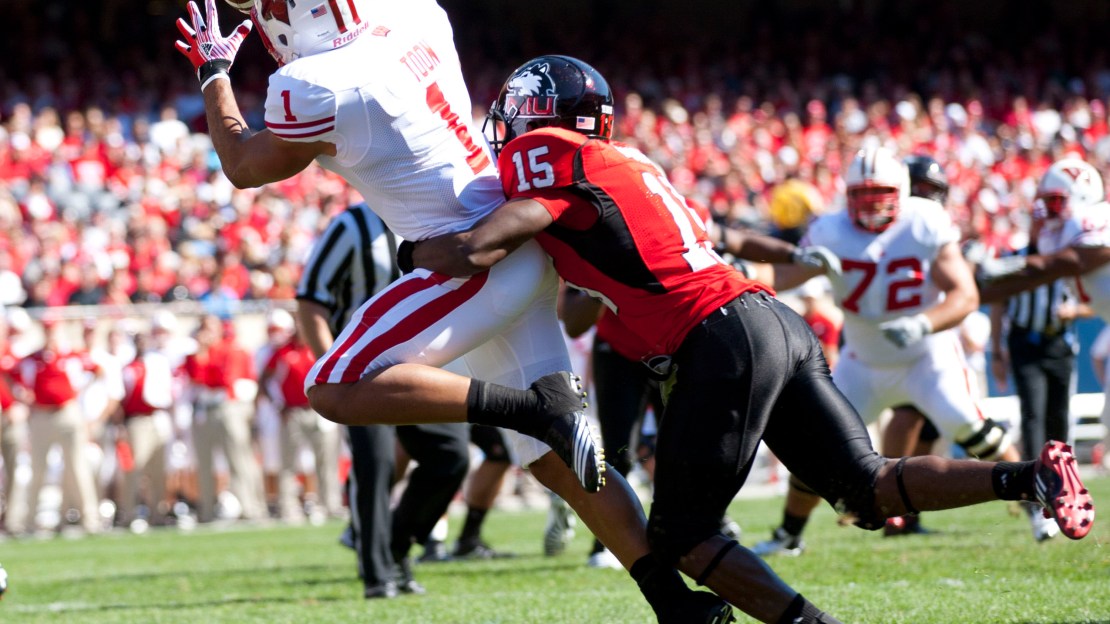 (AP) Russell Wilson threw for 347 yards and three scores, Montee Ball rushed for another two touchdowns and No. 7 Wisconsin piled up more than 600 yards of total offense Saturday in a 49-7 rout of Northern Illinois at Soldier Field. Ball finished with 91 yards on 18 carries, James White added 100 yards and another score, and Nick Toon had two touchdown catches for the Badgers (3-0), who have won 31 straight against non-conference opponents in the regular season. It was an unwelcome "homecoming" for Northern Illinois coach Dave Doeren, who spent the last five years in Madison as the defensive coordinator. Read the full AP recap, check out the box score and see our Big Ten scoreboard.


Check out our quarter-by-quarter recap, powered by Narrative Science:

FINAL: Russell Wilson threw for 340 yards and three touchdowns, leading No. 8 Wisconsin to a 49-7 victory over Northern Illinois on Saturday at Soldier Field. Wisconsin's (3-0) passing game looked flawless, despite the efforts of Northern Illinois' (1-2) secondary. The Badgers' air attack couldn't be contained, as they torched the Huskies for 348 yards and three touchdowns. Wisconsin employed a tough, smash-mouth brand of football and exploited the chinks in Northern Illinois' defensive armor. The Badgers used their running game to great effect, as they picked up 269 yards on the ground. Montee Ball led Wisconsin's ground attack with 89 yards on 19 attempts. The Badgers' offense dominated, ripping off huge chunks of yardage. The Huskies' defense gave up four plays of at least 20 yards. With 10:05 to go in the second quarter, Wilson found Jacob Pedersen open for a 55-yard pass, Wisconsin's biggest gain of the game. Later in the drive, Ball ran one yard to paydirt, which gave the Badgers a 21-7 lead. Northern Illinois' Chandler Harnish went 16 of 24 through the air for a total of 164 yards. Harnish had a good connection with receiver Perez Ashford. He hauled in six catches for 78 yards. The Huskies' offense finished the game having gained 237 yards, including 171 passing yards on 18 completions. Northern Illinois' running game proved ineffective, netting 66 yards on 25 rushes.

FOURTH QUARTER: No. 8 Wisconsin held Northern Illinois to 16 total yards during the fourth quarter and the Badgers finished off the Huskies 49-7. Wisconsin stuffed the run, giving up just -5 yards on the ground in the quarter. The Badgers closed the game on a 42-point run.

THIRD QUARTER: Strong play by the offense carried No. 8 Wisconsin to 14 points in the third quarter and the Badgers now lead 42-7. Wisconsin threw for 110 yards and ran for 94 yards in the quarter. The Badgers have scored 35 straight points. Wisconsin expanded its lead to 35-7 thanks to nine-play, 77-yard drive that ended when Montee Ball turned a handoff into a one-yard touchdown. The Badgers made their lead 42-7 when Russell Wilson threw a nine-yard touchdown pass to Jacob Pedersen on the last play of a seven-play, 79-yard drive. Pass plays were an afterthought for Wisconsin, as the Badgers threw just two passes. Northern Illinois will start the fourth quarter with the ball on its 20-yard line.

SECOND QUARTER: No. 8 Wisconsin has a 28-7 lead after the second quarter. The Badgers have scored 21 straight points. Wisconsin added to its advantage when Montee Ball pounded in a one-yard touchdown run, capping off a 10-play, 97-yard drive to give the Badgers the lead, 21-7. Wisconsin made its lead 28-7 when James White turned a handoff into a 19-yard touchdown on the last play of an 11-play, 67-yard drive. The Badgers' rushing attack finished with just three carries. Wisconsin will have possession to start the second half.

FIRST QUARTER: Russell Wilson had a productive quarter for No. 8 Wisconsin. He threw for 120 yards and two touchdowns and ran for 26 yards and the Badgers lead 14-7 at the end of the first quarter. Wisconsin struck first, marching down the field with a four-play, 52-yard drive that resulted in a the Badgers lead, 7-0, after Wilson hit Nick Toon in the endzone from 12 yards out. Northern Illinois tied the game at seven after Jasmin Hopkins turned a handoff into a three-yard touchdown to end a five-play, 67-yard drive. The Huskies have possession on their 45-yard line to start the second quarter.