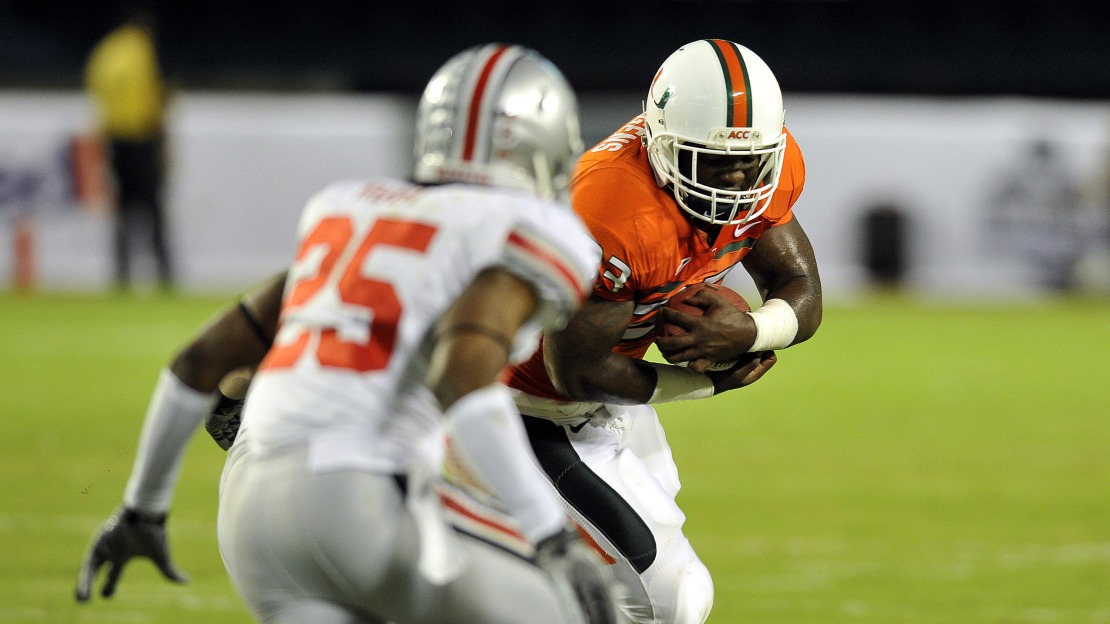 (AP) Lamar Miller ran for 188 yards, Jacory Harris threw two first-quarter touchdown passes to Allen Hurns and Miami avoided matching its longest losing streak in 33 years by topping No. 17 Ohio State 24-6 on Saturday night. Ohio State quarterbacks Joe Bauserman and Braxton Miller combined to complete 4 of 17 passes for only 36 yards. The Buckeyes didn't even bother to try and stop the clock despite having three timeouts with Miami driving in the final minutes with a 17-6 lead. Jordan Hall had 87 yards on 14 carries for the Buckeyes, who are now in danger now of falling out of the AP Top 25 for the first time in nearly seven years. Read the full AP recap, check out the box score and see our Big Ten scoreboard.

FINAL: Miami (FL) beat No. 16 Ohio State 24-6 on Saturday at Sun Life Stadium thanks to a tag-team effort from Lamar Miller and Allen Hurns. Ohio State (2-1) was hard pressed to slow Miami's (1-1) ball carriers. The Hurricanes ran roughshod over the Buckeyes, racking up 244 yards on the ground. Miller was the lead back for Miami, as he rushed for 188 yards on 27 attempts. The Hurricanes' secondary was superb in snuffing out Ohio State's passing game. The Buckeyes were only able to gain 36 yards through the air in the losing effort. Miami's Jacory Harris went 16 of 23 through the air for a total of 123 yards. Harris tossed two touchdowns and two interceptions. Harris had a trusted receiver in Hurns. He caught six passes for 54 yards and two touchdowns. Ohio State's Joe Bauserman was good for 13 yards during the game, completing two of 13 passes. He also threw no interceptions.

FOURTH QUARTER: Miami's Mike James starred in the fourth quarter. He ran for 16 yards and one touchdown and the Hurricanes finished off No. 16 Ohio State 24-6. Miami went on a 10-point run to end the game. The Hurricanes added to their advantage when James turned a handoff into a one-yard touchdown, capping off a 14-play, 69-yard drive to give Miami the lead, 24-6. The Hurricanes kept the ball on the ground during the drive, throwing only four passes.

THIRD QUARTER: There were more punts than points in the third quarter and the margin is still 11, as Miami (FL) leads 17-6. With neither team able to move the ball, there were five punts in the quarter. The Hurricanes' defense shut down No. 16 Ohio State, allowing only 13 yards of offense in the quarter. Miami will start the fourth quarter with the ball on its 19-yard line.

SECOND QUARTER: Tommy Streeter had a productive quarter for Miami (FL). He caught one pass for 29 yards and the Hurricanes are now up just 17-6. No. 16 Ohio State closed the gap to 14-3 when Drew Basil made a 22-yard field goal to cap a 64-yard drive. The Buckeyes kept the ball on the ground during the drive, throwing only three passes. A 16-yard drive that ended when Basil kicked a 24-yard field goal helped Ohio State narrow the deficit to 14-6. Bradley Roby intercepted Jacory Harris' pass setting the Buckeyes up at Miami's 23-yard line to start the drive. The Hurricanes added to their advantage when Jake Wieclaw drilled a 25-yard field goal, capping off a 10-play, 64-yard drive to give Miami the lead, 17-6. The Hurricanes went to the air just three times. Miami is set to receive to start the second half.

FIRST QUARTER: Miami (FL) rushed for 116 yards in the first quarter and the Hurricanes lead 14-0 at the end of the first quarter. Miami took the game's first lead after Jacory Harris tossed a three-yard touchdown to Allen Hurns on the last play of a four-play, 63-yard drive to give the Hurricanes the advantage, 7-0. Miami opened up a lead, 14-0, after Harris hit Hurns in the endzone from three yards out to end a 10-play, 53-yard drive. No. 16 Ohio State will start the second quarter with the ball on the Hurricanes' 45-yard line.