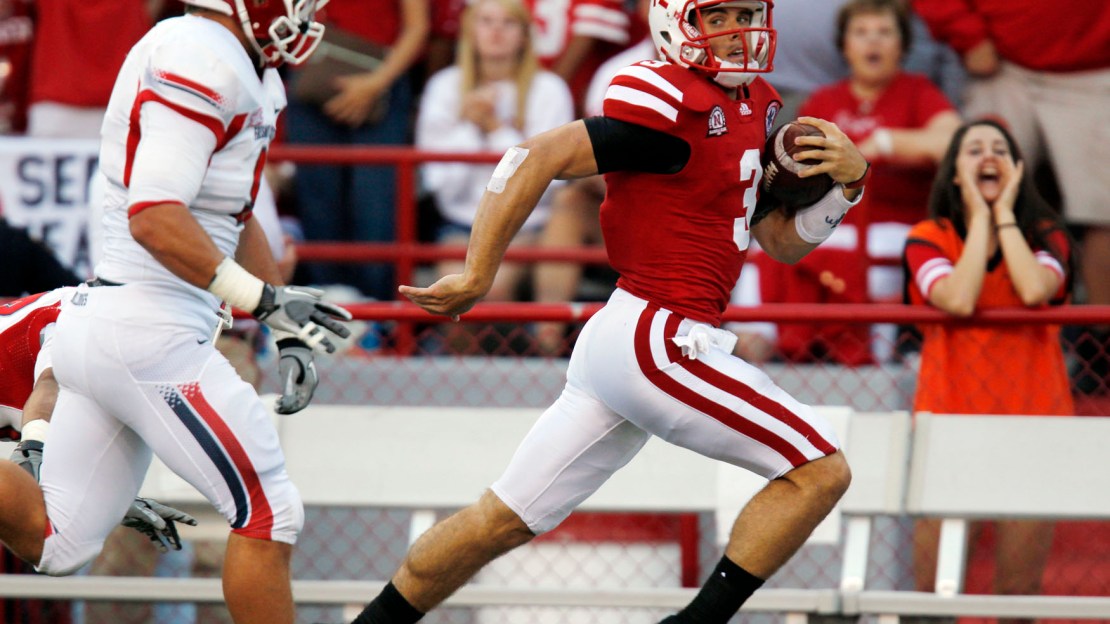 (AP) Ameer Abdullah returned a kickoff 100 yards after Fresno State made it a two-point game in the fourth quarter, and Taylor Martinez's 46-yard touchdown run secured the 10th-ranked Cornhuskers' 42-29 victory on Saturday night. Martinez ran 15 times for 166 yards and two TDs and passed for another as the Huskers turned back an upset bid by the Bulldogs, who were four-touchdown underdogs. Derek Carr threw incomplete to a well-covered A.J. Johnson on a 2-point try after his 26-yard TD pass to Josh Harper pulled the Bulldogs to 28-26. Abdullah, who set a school record with 211 kick return yards, then made the biggest play of the night to break open the game. Read the full AP recap, check out the box score and see our Big Ten scoreboard.

FINAL: Taylor Martinez broke out against Fresno State, piling up 154 rushing yards and scoring two touchdowns to lead Nebraska to a 42-29 victory on Saturday at Memorial Stadium. Defense was an afterthought, as both teams lit up the scoreboard. The Cornhuskers and the Bulldogs rode their powerful offenses to a combined 883 total yards. Nebraska's explosive offense used big plays to take down Fresno State. The Bulldogs' defense gave up seven plays of at least 20 yards. The Cornhuskers added to the highlight reel when Martinez ran 57 yards with 7:45 left in the first quarter. The big gainer was part of a seven-play drive capped off when Martinez pounded in a one-yard touchdown run. That cut Fresno State's lead to 7-6. Nebraska racked up 439 total yards. The Cornhuskers' rushing attack contributed 220 yards on 34 carries in addition to Martinez's passing effort. Martinez threw for 219 yards while completing 10 of 21 passes for Nebraska. Martinez finished the game with one touchdown and two interceptions. The Bulldogs' Derek Carr was good for 256 yards during the game, completing 20 of 41 passes. Carr finished the game with one touchdown and no interceptions. Carr had a trusted receiver in Rashad Evans. He hauled in six catches for 63 yards. Fresno State's offense finished the game having gained 444 yards. In addition to Carr's efforts through the air, the Bulldogs also rushed 40 times for 188 yards.

FOURTH QUARTER: A good offense carried Nebraska to 21 points in the fourth quarter and the Cornhuskers closed the door on Fresno State 42-29. Nebraska finished with 62 yards through the air and 81 on the ground in the quarter. The Cornhuskers added to their advantage when Rex Burkhead ran six yards to paydirt capping off a three-play, 67-yard drive to give Nebraska a 28-20 lead. A 76-yard drive that ended when Derek Carr hit Josh Harper in the endzone from 26 yards out helped the Bulldogs narrow the deficit to 35-26. Fresno State closed the gap to 35-29 when Kevin Goessling kicked a 38-yard field goal to cap a 52-yard drive. The Cornhuskers opened up a 42-29 lead after Taylor Martinez pounded in a 46-yard touchdown run to end a seven-play, 80-yard drive. Nebraska didn't throw a single time. The Cornhuskers' Martinez went over 200 yards passing for the game in the quarter. He finished the game 219 yards passing. The Bulldogs' Carr went over 200 yards passing for the game in the quarter and finished the game 256 yards passing.

THIRD QUARTER: The expected blowout hasn't materialized yet and Fresno State is hanging tough with Nebraska down 21-20 at the end of the third quarter. The Cornhuskers aired it out in the quarter, finishing with 78 passing yards. The Bulldogs made their lead 20-14 when Kevin Goessling drilled a 36-yard field goal on the last play of a 10-play, 61-yard drive. Taylor Martinez's 16-yard touchdown pass to Quincy Enunwa gave Nebraska the lead 21-20 after a five-play 61-yard drive. Fresno State's Robbie Rouse went over 100 yards rushing for the game in the quarter. He now has 128 yards rushing in the game. The Bulldogs will start the fourth quarter with the ball on their 28-yard line.

SECOND QUARTER: Nebraska on upset alert at the end of the second quarter, trailing the Fresno State Bulldogs by a score of 17-14. Nebraska tied the score at 14 apiece after Rex Burkhead turned a handoff into a one-yard touchdown to cap a six-play, 85-yard drive. Pass plays were an afterthought for the Cornhuskers, as Nebraska threw just one pass. Fresno State broke the stalemate with a 11-play, 67-yard drive that ended with the Bulldogs on top 17-14 after Kevin Goessling kicked a 22-yard field goal. The Cornhuskers' Taylor Martinez went over 100 yards rushing for the game in the quarter, he now has 110 yards rushing in the game. Fresno State will start the second half with the ball.

FIRST QUARTER: A potential upset is brewing as Fresno State leads Nebraska 14-7 at the end of the first quarter. The Bulldogs' Derek Carr threw for 80 yards and ran for three yards and one touchdown in the quarter. Fresno State pulled ahead by a touchdown, but the Cornhuskers tied things up at seven when a seven-play, 80-yard drive ended after Taylor Martinez pounded in a one-yard touchdown run. The Bulldogs broke the stalemate with a 12-play, 67-yard drive that ended with Fresno State on top 14-7 after Carr turned a handoff into a three-yard touchdown. Nebraska will start the second quarter with possession on its 41-yard line.